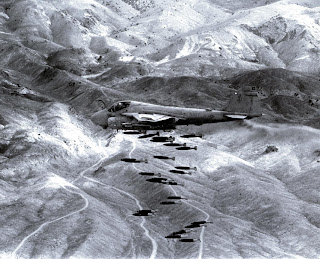 Stolen from Steve Beals at the Swordsmen website. This is the Mighty A-6E TRAM doing the Vis Weps at NAS Fallon, Nevada. Can a Hornette do that? Not on a bet!
I was a member of the Swordsmen of Attack Squadron One Four Five from 1979 to 1982. I made one WestPac and then the Jimmy Carter Hostage Cruise from 10 September 1980 to 5 May 1981. Five days shy of nine months.
And it simply looks vicious in Black and White!
Posted by Glenn Mark Cassel at 16:57

Beautiful picture. I am so glad you were part of Swordsmen of Attack Squadron. I am keen to know your story of bravery.