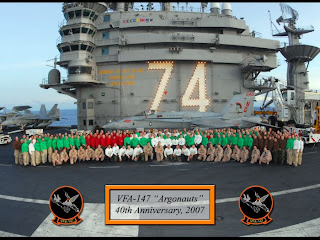 As you fine folks have noticed that I do have a fondness for airplanes. I love airplanes, specifically those airplanes with launch bars, tailhooks and folding wings. Kind of obvious don't ya think?
But somewhat over twenty years ago, I was an Argonaut. But of a slightly different type. When we completed the Circumnavigation aboard The Good Ship USS Kitty Hawk CV63, we were flying and maintaining the LTV A-7E Corsair II. After that deployment, I transferred to NAS Lemoore SeaOpDet. But within two years of the completion of that deployment, the original A-7 squadron had become a Strike Fighter Squadron. That being said, I was still an Argonaut so pictures of that squadron's aircraft will be found at Old Retired Petty Officer on occasion. Even if they are Hornettes(that is for Buck!)
When we celebrated the 20th anniversary of the squadron, most of the people in that photo were children!Reference: Bob Dylan, The times they are a changin'.
Posted by Glenn Mark Cassel at 20:38