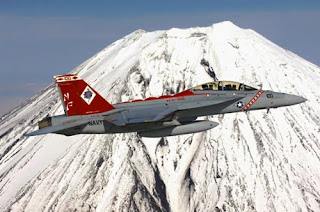 I never was in a Hornette Squadron but the CAG birds are usually very sharp. One of the sharpest is VFA-102 over there in Atsugi, Japan riding the USS George Washington. A long time ago, they were flying Phantoms from the USS Independence. Used to chock and tie those airplanes.
I did a new shot in the header because it has airplanes that represent 11 years or so of my career. Nine in the A-6 and two in the T-2. The pic is of the bone yard at Davis-Monthan AFB in Tucson.
There is a site called Air Fighters at http://airfighters.com/ that has a section devoted to bone yards.
I have one down the road in Mojave. ANA 747s, about a half dozen Air Canada 767s including the Gimli Glider.
For the non aircraft enthusiast, places like Davis Monthan, Mojave, Victorville, Kingman and Marana are where airplanes go to die. Sometimes they do get a reprieve, a fair number are given heavy checks and serviced and sold to other countries.
Posted by Glenn Mark Cassel at 21:59

Just sayin', but... the latest font color experiment hurts my tired old eyes. That's the Ol' Fart in me speaking, of course. ;-)

How's this one?
I have had way too much free time on this long weekend. Ready to get back to work.
I am also trying a shot at new one at Wordpress. Update later.

MUCH better, Glenn. Thanks!