From Blackfive via Buck Pennington at Exile in Portales. Can you believe this sorry sack of shit? What a Fucking Low Life Dirt Bag, Commie Camel Jockey! 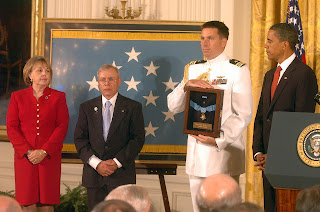 The President addressing the 10th Mountain Division today at Fort Drum:
"First time I saw 10th Mountain Division, you guys were in southern Iraq. When I went back to visit Afghanistan, you guys were the first ones there. I had the great honor of seeing some of you because a comrade of yours, Jared Monti, was the first person who I was able to award the Medal of Honor to who actually came back and wasn’t receiving it posthumously."

As we all know, SSG Sal Giunta, of the 173rd Airborne, was the first living recipient (2011) of the MOH who fought in Iraq/Afganistan. SFC Jared Monti, 10th Mountain Division, was KIA in Afghanistan in 2006. He was posthumously awarded the MOH by Obama in 2009.

Can you imagine Dubya making such a statement?  Neither can I.  I don't like Obama, I don't like his politics, but I respect the office of the president.  That said, this gaffe offends me to my very core.  Say what you will about President Bush but the man would NEVER make an error as grievous as this.  Period.  Obama is worse than a fuckin' joke... the man is not worthy of the position he holds.
http://exileinportales.blogspot.com/2011/06/file-this-under-miss-me-yet.html
Posted by Glenn Mark Cassel at 19:51

You bet. And I also linked it to my Facebook. Exposure!