SHE NEVER SAID IT!......... Most Famous Political Mis-Quote of Our Time

"I can see Russia from my house!" – Sarah Palin
Yup. That's it!
.......Possibly the earliest attack of the ongoing media character assassination of Sarah Palin; it was comedian Tina Fey - impersonating Ms. Palin on Saturday Night Live - who actually uttered this line that is now widely attributed to the former Alaska governor.

The basis for this line comes from a September 2008 interview with ABC News's Charles Gibson, who asked Palin what insights she had from her state being so close to Russia. She responded: "They're our next-door neighbors, and you can actually see Russia from land here in Alaska, from an island in Alaska."

This is true; you can actually see Russian soil while standing in Alaska.
On a clear day, those on the Alaskan island of Little Diomede can see the Russian island of Big Diomede, located across the International Date Line some two and a half miles away. 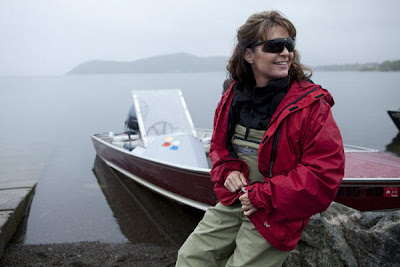 Email ThisBlogThis!Share to TwitterShare to FacebookShare to Pinterest
Labels: because I can, good read, Good Stuff, Linkage, Stormbringer

I could see Russia on a good day from my house in Wakkanai, Japan. That would be the Soviet island of Sakhalin, but no on ever misquoted ME. But then again, I've never run for public office... with MY past no one would elect me dogcatcher.

You're not a Palinista, are ya, Glenn? If so: Aiiieee!

Not a Palinista. But I do like the lady.

I put it up just to illustrate the to what low level the media has descended to.
Not to mention to what end they will go to. That being smearing all who are at odds with the current resident who they pushed and touted.

I like Palin, too. I just don't wanna see her run. She's doin' just fine, doin' what she's doin' now.

Agreed. She can have much more of an impact doing the bus tour and getting folks to understand what is at stake.