The Intercept
"In the E-2, the ACO updates his track video and speaks into his boom mike, “Hobo 404, group Baltimore 195, 20, low, track west, bogey. Hot Dog red at 20 miles”
Turning back into the threat, the lieutenant snaps his visor down against the sun well-risen in the east. He selects his Sidewinder missile, hears the raspy growl of an uncooled seeker head, switches the coolant on, hears the growl fade to a reptilian hiss. He changes missile mode to AIM-120, the advanced, medium range air-to-air missile. He turns his HUD tape on and selects the master armament control switch to “arm.” He arms his chaff and flare dispenser. Whatever happens in the next few minutes, he will be prepared. And he will by God have it on tape. “Leads’ fenced,” he says on the aux radio, prodding his wingman to complete his own combat checklist, and to report it complete.
“Standby,” replies the wingman." 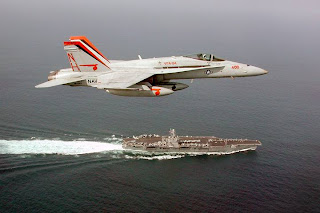