This is a Flight Deck SCRUBEX aboard USS George Washington CVN-73 while underway somewhere on the other side of The World.
Been There. Done That.
Twenty Years ago this next month, I went to sea on GW on it's shakedown cruise with the Air Wing embarked. I was in the Prowler Squadron, VAQ-140. It was the last time I ever went to sea...................... 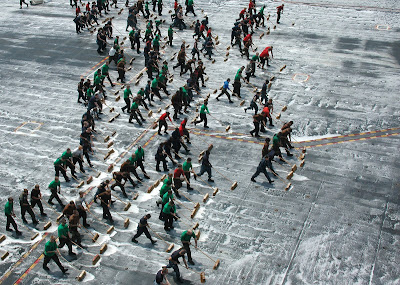 The cleaning agent is AFFF, Aqueous Film Forming Solution. It is basically a detergent. Not only does it put out fires but helps keep the deck clean!
George Washington is forward deployed to Fleet Activities, Yokosuka, Japan with CVW-5 based at NAF Atsugi.
This is the point of the sword and a look at the not so glamorous stuff that is the norm for life aboard a Nimitz Class Carrier.

Mr. Cassel, Actually AFFF is not being used anymore for Flight Deck Scrubs, we actually purchase a Soap that is better for the environment and cleans much better.

I was in Squadron VS-31, embarked on the Eisenhower from '82 to '84. Wasn't part of flight deck crew, I was a disbursing clerk. Good times!

The AFFF was named in the article at 7th Fleet.
We used to use Blast Off when I was in V-1 Division on Independence cv-62.

"L" comes before "O" and I do my reads in alphabetical order. Thus the many "What I said at The Home For Us All" comments. ;-)