In the Thousands. Thousands they say! 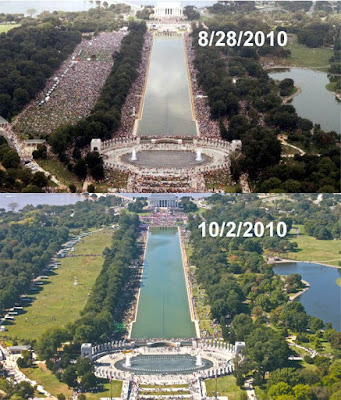 Got this from my friend Melissa. The top is of the Beck Rally on August 28. The lower is of yesterday's obama/commie/union rally.

Seems that the drive by, suck up to The Won Media and their enablers deemed that the turnout was at least, on par with the Restore Honor Rally.
There were  4000? buses loaded with all kinds of devoted supporters. Such as the SEIU, American Communist Party, The Progressive Democrats and the like.

There are other photos out there showing the aftermath. Garbage everywhere. Can't even clean up after themselves.

And the icing on the cake? Ed Schultz was a keynote speaker.
Yeah. Right. Or in this case......so very wrong.

But draw your own conclusions folks. I already know what mine is.
Posted by Glenn Mark Cassel at 07:57

Email ThisBlogThis!Share to TwitterShare to FacebookShare to Pinterest
Labels: because I can, funny, just plain stupid, Perspective, Rant

Good photo contrast. I posted on the trash myself, what a baffoon fest.

Linked you and the photo over on Conservative Perspective.

Outstanding my friend. Thanks for the link.

VF. Thanks. And your wordpress blog is on the blog roll here!

Thanks for the linky love and thank you for your service to our country.

I will add you to my list as well.

Hubs says it's time for a good old fashioned Dungaree Liberty blog mauling of the socialists all the way to the election.

we have fought Communism our entire lives and some have given their lives for our great USA only to find they have been slipping into our political system even as we fought them.

speaking of combating communism, you might appreciate this blogpost...