This brand spanking new Airbus 340-600, the largest passenger airplane ever built, sits just outside its hangar inToulouse , France without a single hour of airtime.
Enter the Arab flight crew of Abu Dhabi Aircraft Technologies (ADAT) to conduct pre-delivery tests on the ground, such as engine run-ups, prior to delivery to Etihad Airways in Abu Dhabi .
The ADAT crew taxied the A340-600 to the run-up area.


Then they took all four engines to takeoff power with a virtually empty aircraft. Not having read the run-up manuals, they had no clue just how light an empty A340-600 really is.
The takeoff warning horn was blaring away in the cockpit because they had All 4 engines at full power. The aircraft computers thought they were trying to take off, but it had not been configured properly (flaps/slats, etc..)
Then one of the ADAT crew decided to pull the circuit breaker on the Ground Proximity Sensor to silence the alarm. This fools the aircraft into thinking it is in the air. The computers automatically released all the brakes and set the aircraft rocketing forward.

The ADAT crew had no idea that this is a safety feature so that pilots can't land with the brakes on.

Not one member of the seven-man Arab crew was smart enough to throttle back the engines from their max power setting, so the $200 million brand-new aircraft crashed into a blast barrier, totalling it.
The extent of injuries to the crew is unknown due to the news blackout in the major media in France and elsewhere. Because........
Coverage of the story was deemed insulting to Muslim Arabs.
Finally, the photos are starting to leak out.
Here they are!
Click for larger image. 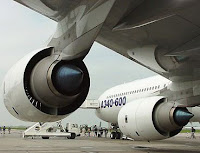 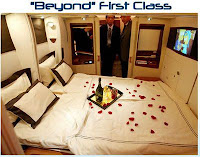 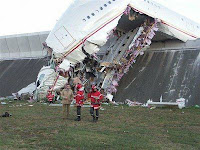 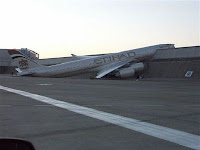 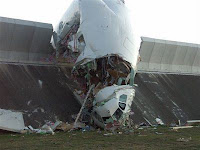 All that money! Gone to waste in a matter of moments.

"And that's why God gave them camels"!
Posted by Glenn Mark Cassel at 09:45

Email ThisBlogThis!Share to TwitterShare to FacebookShare to Pinterest
Labels: because I can, just plain stupid, Oops

I write my blog for me. It is nice if someone comments but, it is for me not other people. Write because you love to write and don't ever feel sorry if you don't get comments. It might be that you stuck us dumb with your brilliance and we just don't know how to answer. MUD

There's not enough money in the world to pay me to fly with those guys. I flew Middle East Airlines (MEA, Lebanon) and Turk Hava Yolari (THY, the Turkish national airline) a few times back in the day and would fly with them again. But these guys? NEVER.

Well, the good thing is that they didn't kill a plane load of passengers....

Dumb Is as Dumb Does!! Great story I seem to have missed on the National News. This seems to indicate extreme arrogance or stupidity. Perhaps this somewhat shows our issues dragging the Iraq & Afghan fighters into the 21st century. BIG QUESTION NOW ? Who owns the wreckage of this expensive plane; the builder or buyers flight crew?