"9 January 1943: At the insistence of the Army Air Forces, Boeing’s Chief Test Pilot, Eddie Allen, made the first flight of the Lockheed L-049 Constellation prototype, NX25600, from Lockheed Air Terminal at Burbank, California, to Muroc Army Airfield (today known as Edwards Air Force Base). Lockheed’s Chief Test Pilot, Milo G. Burcham, was the co-pilot.
When the flight ended after 58 minutes, Allen said, “This machine works so well that you don’t need me anymore!” With that, Allen returned to Seattle." 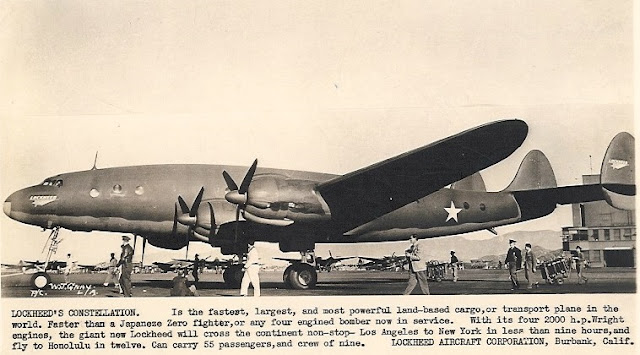 There are more picture at the link below. Enjoy!
This Day in Aviation - Important Dates in Aviation History
Posted by Glenn Mark Cassel at 11:23

I hope you and yours had a very MERRY CHRISTMAS and are having a very HAPPY NEW YEAR. May we display your header on our new site directory? As it is now, the site title (linked back to its home page) is listed, and we think displaying the header will attract more attention. In any event, we hope you will come by and see what is going on at SiteHoundSniffs.com.