"Raytheon's 155mm M982 Excalibur extended-range guided artillery shell is being shrunk down to fit into the Mark 45 five inch deck guns that are deployed aboard the Navy's Cruisers and Destroyers. This miniaturized sea-going Excalibur, known as the N5, could triple the range of current five inch shells and offer pinpoint 'danger close' fire support like never before.

The Excalibur round really is a modern marvel. It can be hurtled out of a howitzer barrel under immense G loads, then once it reaches the top of its trajectory, it begins its guided glide path via pop-out canard control fins, which greatly enhances the shell's range over a standard 155mm round. Because it is guided, it can also hit nearly any target at near vertical angles, allowing it to strike the enemy in the shadow of steep mountains or in urban environments that traditional ballistic artillery could not engage safely." 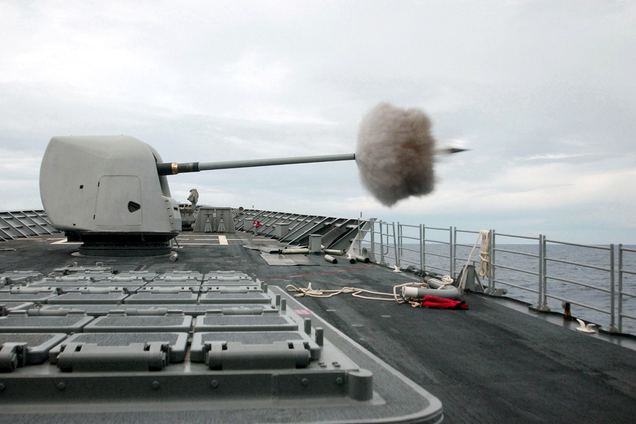 I think this is a good thing, even though I have no real knowledge of shipboard gunnery. Distance coupled with accuracy is something I had to practice as a Deer and North American Pronghorn hunter on the rolling plains of North Central Montana. When all it takes is coordinates plugged in...................the more dead bad guys, the better.
Posted by Glenn Mark Cassel at 03:51

Email ThisBlogThis!Share to TwitterShare to FacebookShare to Pinterest
Labels: because I can, Good Stuff, Splodey, United States Navy