Another sort of famous resident of the "Storage area" at Mojave Airport.
This is the Gimli Glider. It is on Wikipedia. That is the entire story. Go check it out.

A coworker of mine was working for the storage management company and was on the crew that took all the markings off.

Last time I went by it was missing the engines. Word has it from my friend Dwight that she is due to be scrapped.
But the newer ones from Boeing and even Airbus are so much better in terms of the systems installed. 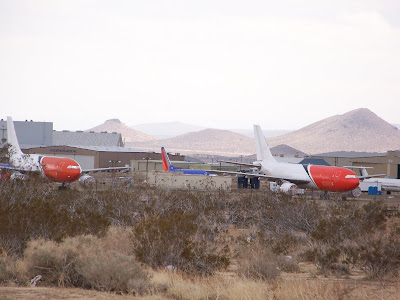 Speaking of Airbus, these A330s have found new homes. Of the six that were here, three of them were at a hangar on the south side of the field in front of a large hangar. They had been there through the winter and into the summer. Less chance of corrosion as they are of mostly composite construction.
Posted by Glenn Mark Cassel at 17:22