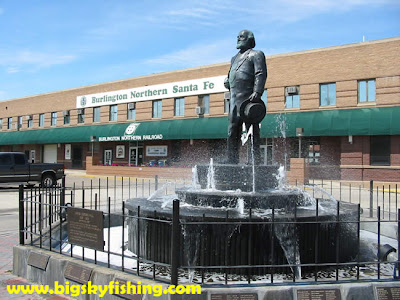 Havre, Montana
Great Northern, Burlington Northern and now Burlington Northern & Santa Fe Depot. Oh yeah, Amtrak is there, too.
The statue is of James Jerome Hill. The Empire Builder. Havre exists as it does solely because of this man. It is the halfway point between the Twin Cities and Seattle. So when the GN was pushing across the Northern Tier it became a major facility for the Railway. Roundhouse, locomotive and car shops and crew point. 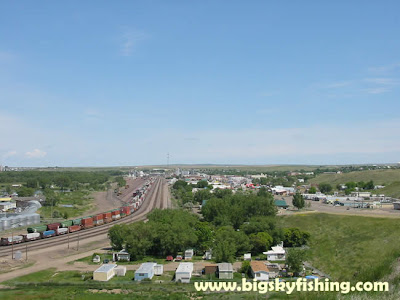 From the hill to the west. Also the site of the Wapka Chug'n  buffalo jump. Along the Milk River. 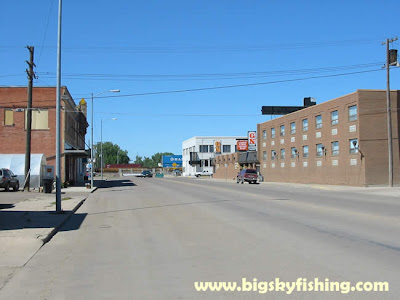 Downtown Malta. This is 89 miles east of Havre. Did grades one through three here. Mom and her parents taught school here. This is Center Street looking north to Hwy 2 and under the railway. Note stack train in picture.The shadow to the left is the marquee on the Villa Theatre. It is the only movie theatre between Havre and Glasgow, 160 miles apart. The GN hotel is on the right. The white building is the First State Bank.
Grandpa, Grandma, Great Aunt and an Uncle are buried here. People still knew who I was when I was dumping the rock train from here to Glasgow in the spring of 07. Like when I was in diapers remember.
Posted by Glenn Mark Cassel at 13:17

Email ThisBlogThis!Share to TwitterShare to FacebookShare to Pinterest
Labels: just because, Memories

USAF used to have a radar site at Havre. I never made it there, but I was close... in Fortuna, NoDak. Which was a LOT smaller, i.e., pop 75.

But I knew folks stationed at Havre and they ALL spoke highly of the place. I'd wager there are even a few ol' retired radar dudes living there today.

The site shut down in 93, just about the time I retired!

One of my friends in high school lived out at the base, we had 2 or 3 slumber parties out there. The only black kids in my graduating class were Air Force brats, too.