From the past, Darkly? 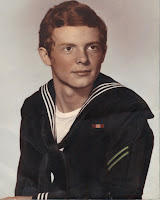 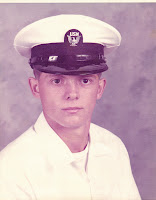 The left one is from my first cruise to the Med aboard USS Independence. Taken in about November of 1974.
The one on the right is from Boot Camp in San Diego in the Fall of 1973. The Navy was in the process of going to the coat, tie and combination cover uniform. That lasted until about 79 or so. I went back to the jumper uniforms in 1981.
Posted by Glenn Mark Cassel at 09:11

Email ThisBlogThis!Share to TwitterShare to FacebookShare to Pinterest
Labels: catching up, funny, Navy

Some of them did. Including a VA VA VA Voom!

That port side photo is pretty swayve deboner!

The Boot Camp Pictures are always kind of dreadful.

Ah, to be a proud non-rate E-2 with no real responsibilities, dem were da days!